Learning to deal with arguments and come out the other side with minimal negativity or damage is a key aspect in the conflict solving stage of a relationship.

One step further is preventing arguments from occurring in the first place. It is an advanced skill for couples to achieve but one that ultimately leads to the most continually positive and fulfilling relationships.

The majority of arguments and negativity in a relationship stem from not feeling loved, valued or respected enough. Hence it seems obvious that the prevention of arguments is achieved simply by maintaining a mutual and healthy level of love, value and respect. It is indeed that simple on the surface but the process along with its obstacles is slightly more complicated.

The rest of this article will discuss specific ways to maintain love, value and respect but if you keep those three concepts in mind at all times, you give yourself the best chance of catching yourself before you ever reach argument mode.

A quick tip to maintain love, value and respect:

One of the most important rituals in a relationship is the first time you see each other and each time you say goodbye. Even if you have daily frustrations brewing or you are feeling in a bad mood, make a conscious effort to be enthusiastic, positive and loving when you first see your partner. You will avoid the risk of taking your temper out on them or setting a negative mood as soon as you see them.

I’ve witnessed this one technique alone have extremely positive effects on relationships. If you always greet and leave each other with positive emotions, you will find it far less tempting to argue with each other during the times in between.

Rid your relationship of blame and ego:

If you break down the actual content of any argument, it will usually be fuelled by something that has happened in the past, whether directly or indirectly. Either way, it manifests as a form of blame; blame that derives from a feeling of injustice or a feeling that your partner is inconsiderate or wrong.

This is one of the primary issues to overcome if you are to completely rid your relationship of arguments: the need to feel right!

This links back to the idea of maintaining a mutual and healthy level of love, value and respect. If you make an effort to prosper across all three areas, you will never feel the need to highlight that your partner is wrong. 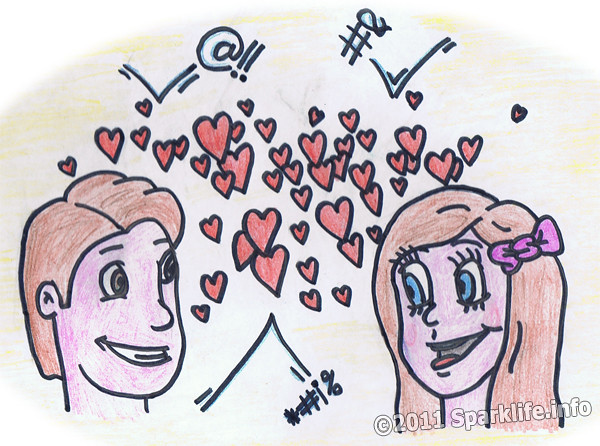 Heidi and I by no means agree on everything but we always respect and empathise with each other’s viewpoint. The substance for an argument is merely a different opinion, feeling or emotion to yours and it takes an enlightened mind to realise and empathise with that.

It is great to be able to let things go in your relationship, even if you are adamant that you are in the right. Having said that, a common trap to fall into is to not actually let the argument pass completely and instead stockpile these moments for a later time. In this case, you aren’t preventing an argument, you are merely postponing it!

Arguing couples can fit into two categories. The first are the ones who constantly seem to be arguing about trivial things and rarely seem to ever find peace. The second are ones who do the stockpiling technique and after going a certain amount of time without any arguments, will let it all out in an eventual crescendo of acrimony.

Letting go of blame and ego influenced arguments means truly and deeply letting go and not merely postponing those feelings.

One thing that gets easier over time is learning to predict your partner’s mood and calibrate your behaviour accordingly. If your partner has had a long day or you can sense their frustration building then the onus is on you to actively avoid any negative emotional spikes.

A negative emotional spike is an instance, be it verbal or physical, that antagonises or fuels your partner’s temper.

Such spikes of emotion are easy to avoid by being more aware and biting your tongue if you start to feel criticised or attacked. This leads into the next point about changing emotions.

Change their mood, not their mind:

One of the great things about emotions is that they can be changed in an instant. Imagine you are having a terrible day where nothing seems to be going right and everything seems to be infuriating you. Now imagine that your boss calls you unexpectedly and tells you that you are getting a promotion. Instant change of mood!

This same concept can be applied to your relationship. Following on from the earlier point about anticipating arguments, make it a priority to try and positively change your partner’s mood when they most need it. Positive emotions are contagious and easily reciprocated.

It is okay to disagree in a relationship. It is HOW you disagree that is important. One of the most underrated sayings in a relationship is “let’s agree to disagree”. If you can disagree without coming across as patronising, condescending and most importantly, without implying that anyone is right or wrong, those discussions will rarely escalate into full-blown arguments. 🙂

10 common mistakes men make in the bedroomIs your partner perfect for you? Read this and see…
Scroll to top