Humans are social creatures and as a side effect we have developed several hard-wired survival techniques. The ability to lie is one of those, although that does not mean it is the best technique to succeed in modern society, let alone relationships!

I was recently interviewed by an online publication on the benefits of lying in relationships (a loaded title if ever there was one) but it did get me thinking intently about why couples lie to each other. The truth is that however honest a couple say they are there will always be one or two things that can be construed as dishonest by the other person. The question is where do trivial lies cross over into damaging lies?

This article will explain the different types of lying, the reasons why people lie in relationships and then discuss some pressing consequences of lying…

The different types of lying:

There are three main types of lie, each varying in intensity, and what is right and wrong for you will largely be based on your own moral upbringing and development.

The three main types of lie in a relationship are…

These are the big lies; the lies that will probably end the relationship if they are uncovered. The most common lies in this category are either regarding secrets from the past or one partner cheating on the other. It is generally a combination of having pruned the lies for too long and not wanting to hurt a partner’s feelings that intensifies complicit lies.

If you’re worried that you are sometimes compelled to tell these sorts of lies, or that you may be a victim of them, then the article I wrote titled Cheating on a partner does not matter is worth reading. If a monogamous relationship is not for you then there are specific ways to frame a more open relationship so that both people remain happy and there will be no need for lies or cover-ups.

These are often referred to as incessant, compulsive or unnecessary lies, or lies that have become ingrained in someone’s character. The problem with lies on this level is that pathological liars often truly believe that what they are doing or saying is right, regardless of their partner’s feelings.

Changing the habit of lying, whether it is your problem or your partner’s problem is not something that can be done overnight. Long-term compassion and a mutual understanding that you won’t react irrationally to honesty is the only way to change these types of lies. That is why people learn to lie after all: when the outcome of lying is less painful and less effort than telling the truth!

Social lies are the everyday small lies, or “white lies”. They are the grey area of lying in a relationship and the only way to not have problems with them is to have a verbal understanding with your partner over what is acceptable and what is not. Second to that is to never feel disrespected or aggrieved by these small things; they are usually unintentional and trivial!

People argue that this type of lying can actually be done for the greater good, such as preserving your partner’s feelings or perhaps even organising a surprise for them. Once again this comes down to a couple’s own understanding with each other’s morals.

Having said that, I don’t think I have ever heard a genuine, acceptable answer to the question, “Does my bum look big in this?” if you think that it does! 🙂

The reasons for lying in a relationship:

During childhood, parenting psychologists have noted several key stages where our conscience develops and we start to make our own judgements on when and how to lie. Lying in a relationship will reflect this conscience, therefore how much someone lies in a relationship and how much they lie outside the relationship is roughly equal.

In a relationship there are two main reasons for lying and they involve protecting your own ego and protecting the ego of your partner. There are also instances where they can be simultaneous reasons.

I advocate being in the moment when interacting with your girlfriend or boyfriend but when it comes to justifying lies, you must think of the bigger picture. Aside from the fact that you will have to live out your lies for the duration of the relationship, there is always a better solution that will allow you to have integrity and still have the desired outcome. Being honest is the only way your relationship will become truly fulfilling.

Lying is basically a way for the ego to have control over a situation without having to make the effort to get a desired outcome in a risky yet wholly fulfilling way. If you can eliminate all of your personal insecurities then you will never feel the need to lie, and if you work on controlling your ego and developing your confidence in all areas you will always find a respectful way to get what you want. 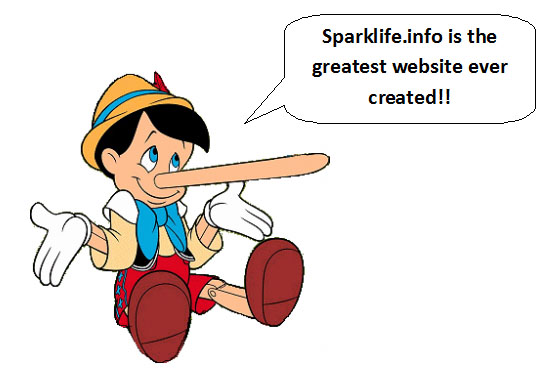 As an additional thought, I am going to finish this article with one of my favourite quotes by Abraham Lincoln: “No person has a good enough memory to be a successful liar!” 🙂