Every relationship is unique and what works for one couple does not necessarily replicate for every other couple out there.

Having worked with hundreds of couples from all sorts of backgrounds, beliefs and experience levels, I have started to discover more and more trends that DO span across a variety of different relationships and more specifically, how those relationships develop over time.

In this article, I am going to present to you a simplified version of this relationship development in the form of an illustrated time line. It portrays two of the core elements behind every happy and fulfilling long-term relationship. I call it The Happy Relationship Time Line…

Before viewing the below illustration, please note that both the simplicity and time frames portrayed are somewhat generalised. Some relationships progress far quicker than others and some people can feel that they are in a committed, long-term relationship within a matter of months. For those relationships, I believe that the basis of the time line still holds true, but its duration will be far more condensed. 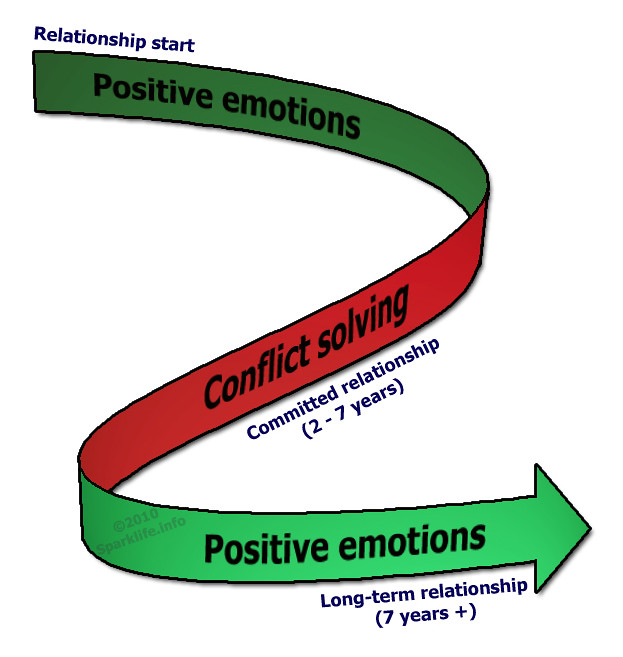 Positive emotions in the early stages of a relationship:

It goes without saying that your relationship’s success in the early stages is down to how much you like each other and how many happy moments you share together. This comes predominantly in the form of attraction and balancing interest levels as mutual rapport is steadily created.

Besides being confident, the most successful men I know at dating attractive women are great at sparking an element of excitement and fun in their interactions with them. Spiking a woman’s emotions in this way is a sure-fire way to create attraction. This works in reverse for women attracting men too.

The attraction phase in dating carries on for some time before two people have developed enough deep rapport to enter a undeniably monogamous and loving relationship together. Any relationship that becomes samey, predictable or mundane early on will generally continue along that path.

A similar pattern is witnessed via many of the reputable dating coaches I’ve worked with, many of whom are not interested in committed relationships themselves, at least for the time being. If that lack of desire or interest to keep the relationship positive, fun and exciting peters out too soon, then the relationship usually deteriorates soon after.

Some other things that create positive emotions in a relationship besides being fun and interesting are spontaneity and surprises, thoughtfulness and a varied sex-life.

Conflict solving in a committed relationship:

As commitment levels grow, real life contingencies and the need for compromise within the relationship start to arise.

Earlier on in a relationship, conflicts such as arguments and insecurities not only present themselves less frequently but they are also best to be consciously avoided. I hesitate to use the word ignored, as it suggests a lack of empathy or caring, but being able to change your girlfriend or boyfriend’s mood in the early stages of a relationship is generally far more effective than entertaining or focusing on any arguments and insecurities.

Having said that, once a relationship does become a serious and mutual commitment, these natural conflicts and learning to overcome them directly will become more integral to the relationship’s overall happiness.

The specific strategies to overcome things such as compromise, jealousy, anger, annoying habits and negative emotions are found elsewhere on this website. The importance of discovering a way to do this together is probably the most important piece of relationship advice there is.

Positive emotions in a long-term relationship:

I regularly work with married couples and other couples who have been together for a considerable amount of time. I am also in a relationship of over ten years, so my experience and observations of long-term relationships is quite significant.

Once a happy relationship has reached several years – the time line states seven years but that figure is fairly arbitrary – a romantic couple has generally figured out a conflict management strategy that works for them. The roles in the relationship have long been cemented and knowing and dealing with each other’s emotions and vulnerabilities should have become a subconscious competence.

It seems that the relationships that are successful, fulfilling and ultimately happy beyond this timespan are the ones that revert back to concentrating on how many happy moments they share from day to day.

Remember that if you’re sharing a life together, it’s just as important to remain attractive and interesting to your partner as it was when you first met. 🙂