Criticism is defined as the act of passing judgement on both the merits and faults of something someone does, although in a relationship it is associated predominantly with negative feedback:

“That’s typical of you…”

Criticism is something that is rife in all areas of life, from family to business, but it is in a long-term relationship where criticism can feel particularly hurtful and can easily develop into something far more sinister…

The characteristics of criticism:

Personal criticism is a state-based trait, meaning it is a reflection of how someone is feeling at a particular moment in time. This makes it extremely easy to crop up without warning and sneak into an otherwise positive and happy relationship.

Just like contempt in a relationship, criticism is something that develops slowly. Coupled with the fact that the honeymoon/dating phase of a relationship can obscure negative aspects of someone’s personality, the first signs of criticism can seem rather innocuous.

Due to this slow and unsuspecting progression, the first criticising remarks in a relationship may go ignored, which begins to act as acceptance for the behaviour, reinforcing its habitual nature.

This is why criticism is something that occurs far less frequently amongst new couples who are still in the dating phase, or at least is far less of an issue in this instance. Once it has developed into a default method of communication between a couple, it is extremely hard to instantly transform those methods. 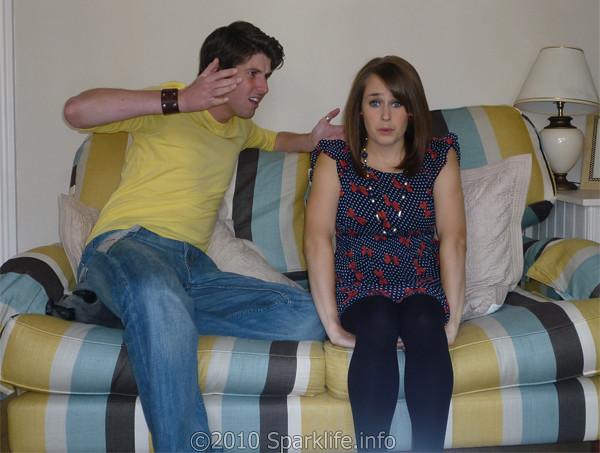 Criticism is the development of both contempt and complacency in a relationship. This can manifest as a subconscious realisation that your partner isn’t as perfect as you had originally projected, or because you have become overly comfortable in your relationship and can’t imagine your partner leaving you. The latter of these examples is common amongst married couples, or couples where contempt has manifested through an increasing lack of fulfilment in their relationship.

An alternative to trying to make your partner stop criticising you:

The interesting thing about receiving criticism is that it says more about how we feel personally than the actual topic and content of the interaction.

If we are in a happy and positive mood then it is extremely hard to feel criticised, whereas if our self-esteem is at a particularly low point, almost everything with even a hint of negativity will be interpreted as criticism.

If your partner does occasionally project a low self-image that suggests insecurities or vulnerabilities, then making a conscious effort not to invoke further negative emotions is recommended to keep the relationship happy and positive.

The positive aspects of criticism:

Whilst there is always a more loving and empathetic way to communicate with a girlfriend or boyfriend than a way that makes them feel criticised, there is also always a positive reframe that you can do.

The positive reframe is to view criticism as a learning tool. On a basic level, your partner is trying to communicate that you are doing something irritating, unwanted or antagonising. It takes a calm and aware individual to be able to successfully turn criticism into a learning tool for self-improvement.

In fact, if I ever feel criticised, the first thing I will always ask myself is, “Why is this person saying this? Is it justified?”

This saying refers to how easily water glides off a duck’s smooth, slick feathers… and this is exactly how criticism can be handled!

The thing to note about criticism is that it is rarely anything personal. It is dynamic, contextual and in direct retaliation to something you are doing.

With practice, it becomes easy to quickly interpret criticism, dissect any justification from it and then disassociate from the rest.

We do this all the time with people we aren’t emotionally attached to. If a passerby aims a rude or scathing comment at us, it’s rare that the resulting emotional reaction is long-lasting, especially if we see no justification in the comment.

Talk to your partner about rephrasing criticism:

Even though criticism is largely about how feedback is interpreted and our own self-esteem, there are definitely more empathetic ways to communicate with a loved one. If you do feel that you partner is overly critical of you, you can discuss ways to share your thoughts and feelings that are more mutually respectful.

As discussed earlier in this article, criticism is as much about the person doing the criticising as the person being criticised. Consequently, a far better way to communicate any criticism is as personal feelings without blame. Some questions to consider with your partner, although not to necessarily repeat verbatim are:

A better way to phrase criticism – The compliment sandwich:

Whenever I’m teaching a seminar group alongside other dating coaches, we often utilise a common psychological technique called a feedback sandwich. This technique involves giving some critical yet useful feedback sandwiched between two pieces of praise. The result is that the student still receives the feedback they require but it is packaged as far more positive and rewarding. This technique can equally be used with a girlfriend or boyfriend in the form of a compliment sandwich.

The compliment sandwich involves sandwiching a negative or “criticising” remark between two relevant and sincere compliments. Obviously this should in no way seem contrived or condescending and if done correctly, it will take a lot of the hostility out of any criticism.

The Compliment Sandwich – see the comments section below for an example.

The main reason that criticism can seem so harsh is that it makes people feel unappreciated, so by using softening techniques and better communication, criticism can be delivered and received with compassion and good intent. 🙂