My wonderful Mother, knowing what I do for a living, recently decided to surprise me by buying me a book that has been getting a lot of media attention lately: How to Talk to Girls by Alec Greven. The talking point being that this so called “Dating Guru” is a nine year old boy from America… 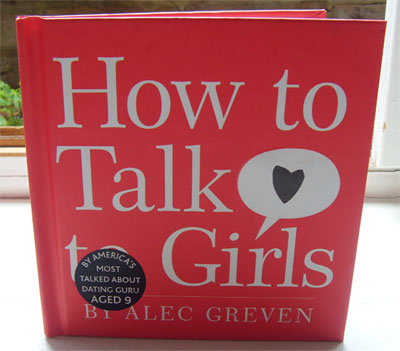 How to Talk to Girls by Alec Greven

Thoughts prior to reading:

You would immediately think that it is obvious to take this boy’s advice with a large pinch of salt and that it is more intended to be a comical story from a cute kid rather than a literary masterpiece. Upon reading the blurb on the back cover, it implies that this book is actually intended to contain guided advice though; “from eight to eighty… read this book and then you’re ready.”

Although still sceptical, I opened the first page with a renewed optimism that it could contain some pearls of wisdom… It is a published book after all!

The advice it gives:

This is a very short book and so ten minutes later I was finished. I was pleased to see that it clearly hasn’t been edited too harshly and the childlike style is evident in the way it is written. Coupled with some amusing illustrations, it was actually a very enjoyable read. It is only when you take a second thought at the actual content that the more harmful side effects of the book’s advice emerge.

One of the primary points he makes at the beginning of the book is, “life is hard, move on!” Whilst this appears to be good advice for people of all ages, it is not so simple to apply. This goes for most of the good points that he makes: they are audaciously vague in their conveyance. Points such as “Don’t act desperate” seem useful but the book lacks any practical application, even for someone who probably hasn’t experienced what he is preaching.

It is some of his more glaring points that disappoint me though, as they are an exact replica of modern society’s damaging portrayal of males versus females. The first of which is when young Alec Greven states, “You must accept that women have all the power”.

Although the bulk of society is governing for an equal standing between the sexes, references like this just go to show that kids are still being taught sexist and mildly misogynistic morals.

Another noxious viewpoint is when Alec Greven writes about not bothering with “pretty girls”, once again with very stereotypical references: “It is easy to spot pretty girls because they have the big earrings, fancy dresses and all the jewellery.”

He continues, “The best choice is a regular girl… Pretty girls are cold-hearted when it comes to boys.”

Although this is all very cutesy coming from a nine-year-old boy, it’s not a very healthy mindset to have towards women, even more so at such a young age. The main reason why so called pretty girls often end up with more insecurities and more attitude towards men in later life is because they are judged so chiefly on their looks whilst growing up and treated differently as a consequence.

The last piece of damaging advice that Alec Greven gives is, “if the girl is wild, then just act like her.”

I know once again I shouldn’t take his advice so literally, but to promote such a lack of authenticity at such a young age is surely pernicious towards a boy’s development.

Content aside, another thing that doesn’t particularly sit well with me is the clear exploitation of a young boy who apparently wrote the book as an unrelated school project, before the media got hold of it and gave it explosive exposure.

I recently wrote an article for a parenting brochure about teaching kids the importance of being rewarded for the value they can offer, and this goes against a lot of those principals.

Whilst Alec Greven has no doubt made a fine profit from his book (assuming he is allowed access to it), he is being encouraged and praised for offering unqualified and potentially harmful advice.

To conclude this review, How to Talk to Girls by Alec Greven, although extremely short in length for its cover price, makes a fun novelty gift for someone who doesn’t take things too seriously. As far as buying this as a genuine resource for a child – which it seems a fair number of parents have done – I would recommend teaching them relationship morals and values yourself. 🙂