Read on for the story of how I approached and chatted to a rather famous celebrity, and how it went from miraculously well to unsalvageable in one swift swoop…

You don’t expect to meet A-list celebrities where I am from. I live in a historic, little town with a hip vibe in the South of England but it is still far removed from the glitz of Beverly Hills.

On this particular night I was out at a funky, local bar with a medley of social circles. There were several people amongst these groups of friends that I knew very well and there were some that I had only met that night (a point that becomes significant later on in this story).

It was a jovial evening and spirits were high. El vino was flowing and the laughter was boisterous, but all the discussions had turned to focus on a glamorous maiden nestled away in the corner of the crowded bar. It didn’t take long for people to start recognising who she was… it was only EMMA WATSON, star of the world famous Harry Potter movies!

My friends, knowing what I do for a living, were already goading me to go and approach her. I was up for the challenge, although I had to make a conscious effort not to let the awe of the situation get to me.

It was a live music night in the venue, loud and busy, so as I was strolling across the room I knew I was going to start with a low-committal and high-compliance conversation starter. This type of conversation starter is anything that prompts a socially polite response, where you are unlikely to get a rude or dismissive reaction.

I arrive at the group, compose myself for a split second and say with a friendly smile, “Which band are you guys here to see?”

Emma and her friends turn to face me. “Err, we know the organiser,” her tall, male friend nonchalantly replied.

“You guys don’t seem very local,” I said with an inquisitive look, “Whereabouts are you from?”

As I continued, I moved slightly to position myself more directly alongside the group. This seemingly insignificant action changes the dynamic completely as I now become observably part of their group rather than an outsider, a stranger.

This short exchange had warmed me to the group so I introduced myself, “I’m Sam, by the way,” as I held out my hand to greet my new friends.

Even though I already knew who I was speaking to, a flutter darted across my chest as she responded with a warm smile, “I’m Emma.” I snapped back to reality and composed myself. After all, my main focus of the whole interaction was to treat her like the normal person she is, beneath the glamorous, celebrity shell.

Playing on the fact that they had never been to my hometown before, I decided to make the interaction a bit more fun. “Here, I’ll teach you the secret Surrey handshake that only a few special people around here know.”

I proceeded to teach Emma an overly elaborate and comical handshake, dressed with various clicks, flicks and slaps. She absolutely loved this little routine and it was definitely starting to set me apart from most of the people she meets.

“How do you all know each other?” I asked.

“We’re in a relationship together,” replied her tall friend Jay, motioning between himself and Emma.

Prior to this revelation I had an assumption that they might be a couple. This didn’t change anything. I would never disrespect someone’s relationship and I was simply enjoying making friends.

There were other people around Emma now so I turned my attention towards her boyfriend Jay. We had a brief chat about where he is from and what he does etc. It was very basic conversation but I was definitely warming to this guy and I could see why he had wound up dating a celebrity megastar.

After a few minutes, I glanced over at Emma and she looked like she was feeling slightly excluded.

“I have an intuition about you,” I mused in her direction. I turned back to Jay: “Do you mind if I borrow Emma for a second? We’ll just be over there,” I said, pointing a few feet away towards some chairs. He had other friends around him so I knew this wouldn’t be a problem. Emma and I stepped to one side.

I can’t remember my exact words during these few minutes in private with her but what I was basically doing was explaining some simple intuitions I had picked up about her during our limited interaction so far. This is something I’ve become very skilled at from years of studying social psychology and is far more casual in practice than it sounds.

I was enjoying getting to know Emma a bit better and for a brief moment her celebrity status had been washed away. It felt like I was getting to know the real her, beyond what the cameras see.

“You’re actually really cool and it would be great to keep in touch. Hand me your phone a second.”

Emma passed me her phone. I quickly dialled my number from her phone so that I also had her number. I could feel my friends’ stares burning on the back of my head from across the bar and I was conscious of not outstaying my welcome, so we rejoined Emma’s entourage and I prepared to say my goodbyes, however I didn’t get quite as far as that…

Avada Kedavra – The interaction takes a turn for the worse:

Craig was a quiet but pleasant guy with blonde, shaggy hair. I had been introduced to him at the beginning of the night, several hours ago, but had barely spoken to him since then. This is what made the next few moments even more of a surprise.

As I was wrapping up my meeting with my new friends, out of nowhere came an inebriated bellow, “Sam, is that Emma Watson!” Before I had a chance to respond, Craig was alongside me awkwardly clinging to Emma’s midriff, whilst bouncing up and down chanting, “oh my word, it is you!”

As amusing as this scene must have looked to everyone around us, I could sense the instant unease amongst Emma and her friends, so I decided the best course of action was to politely drag my acquaintance away.

As we headed back to our friends, Craig seemed blissfully unaware of his social faux pas and was still noticeably excited that we had a celebrity in our presence.

I rejoined my friends and was hit with a barrage of questions about everything we had talked about. I dismissed Craig’s little cameo from my mind; I had Emma’s phone number after all, so I could speak to her again regardless.

I continued with our jovial night out and hadn’t noticed that Craig had slunk off from our party. Several minutes later, Craig appears before me with a beaming smile: “Sam you’re going to love me.”

He continued, “I went back to Emma and told her it was your birthday. I said that you were a massive Harry Potter fan but you were too shy to ask for her autograph. Here, I got this for you.”

He proudly presented me with a crumpled napkin like a king being bestowed his crown for the first time. I unfolded the napkin to reveal a scrawled message written and signed by Emma Watson. 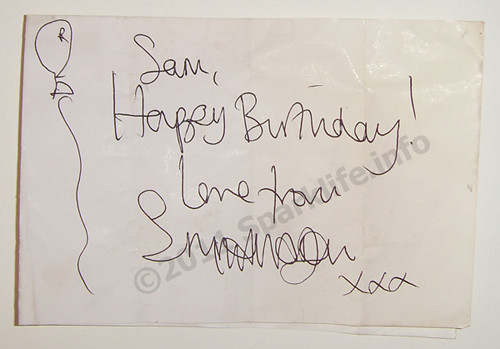 I glanced over and saw Emma and her friends leaving the bar. Craig had unwittingly transformed me from a cool guy she had met randomly… into another obsessed fan of hers!

Perhaps she didn’t believe Craig’s revelation – it certainly was not congruent with how I had been behaving – but even so, I knew my chances of having a wealthy, celebrity friend had just taken a dramatic nosedive…

Moving in together – Tips for living with your girlfriend or boyfrien...There is no such thing as the perfect partner… or is there?
Scroll to top